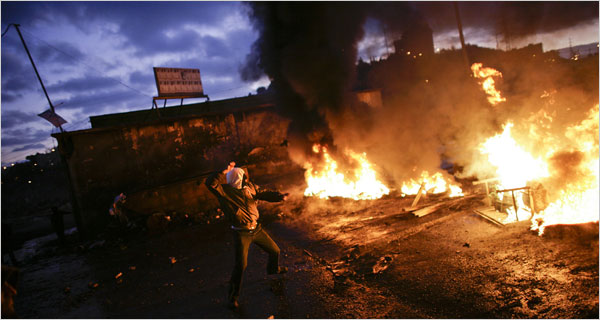 The recent actions of the government of Israel have gone far, far beyond the boundaries of acceptable conduct from any government.  The Israeli government has supposedly lurched into action because of  radical Hamas group’s rocket attacks.  However, the distinction that must be made here is that an elected government that allegedly operates following democratic norms and conditions, should not respond by indiscriminate attacks upon a civilian population to “capture” militants.  The Israeli government has proclaimed that their all out offensive on the Palestinians is a success as they have already captured “terrorist” leaders and active militants.  However, the question that needs to be asked is whether the price that innocent have to pay for this “success” of Israel is either worth it or acceptable.

Whether one supports the cause of the Palestinians or not is no longer an issue.  These aspects of the situation have been neutralized by the Israeli government.  What is today’s issue is the all out offensive being carried out by the state of  Israel against ALL Palestinians.  What is at stake today is not a few settlements, not strips of occupied lands, nor is it quibbles about whether it was the Palestinians or the Israelis that are more to blame.  What is at stake today is clearly and simply the very survival of a whole people.

What the Israeli government is doing can be termed no less than an act of ethnic cleansing.  The government of Israel ’s actions are accomplishing the aim of creating a truly Jewish state, where religious pluralism will not, cannot and must not exist.

Notwithstanding the moral ambiguities present in the Palestinian suicide bombings or rocket attack, the dubious and immoral quality of   Israeli Government’s actions remains open to question. A dubiousness that is strongly reflected in the small but significant dissension that has arisen in recent times even among the Israeli Jewish community as to this attempt at systematic extermination of the Palestinian population.

With all due respect to the sufferings that the Jewish community have endured, Israeli Government seems to be a bigger problem than the problem it attempts to mitigate. Israel is using white phosphorous gas, an illegal chemical weapon that burns to the bone. Dr. Mads Gilbert, a member of a Norwegian triage medical team working in Gaza, has documented Israel’s use of Dense Inert Metal Explosive (DIME), which cuts its victims to pieces and reportedly causes cancer in survivors. Gilbert, who has worked in several conflict zones, said the situation in Gaza is the worst he has ever seen. Two United Nations schools have been hit by airstrikes, killing at least 30 people. The New York Times reported on Monday that Gazan hospitals are full of civilians, not Hamas fighters. Many supporters of Israel partly side with it because radical groups in the Middle East are determined to wipe it off the face of the Earth. But they must understand that would mean a repeat of the Nazi-type genocide against Jews, and that is unacceptable. Israel’s right to exist is based on a powerful moral imperative that derives, in large part, from the Holocaust. If it loses that through its severity against the Palestinians, it loses the argument about its existence.

Therefore, we, people of diverse cultures, countries and creeds, have come together for the common good to demand that the rights of human beings be upheld against the rights of any particular state, race or religion, and that the wholesale slaughter of Palestinians be stopped immediately. We demand that Israeli government be made to account for his war crimes – both present and past.